Dodge preschoolers are scaling a mountain of snow, sliding down its face, and crawling through a tunnel at its base. Even on a dazzling February morning, their smiles outshine the sun. It’s a bitter 5 degrees outside, but these three-, four- and five-year-olds look as playful and well-insulated as river otters on a frozen creek. What’s their secret? Their layers of colorful clothing are warm and waterproof.

“Winter is awesome if you have warm enough stuff,” says Dodge naturalist Mick Garrett. “It’s like that saying, ‘There is no such thing as bad weather—only the wrong clothes.’”

In other words? “No tennis shoes in the snow!” Mick says.

Around the snow mountain, the field is compacted by boot tracks. It’s clearly a popular spot. The preschoolers hiked a quarter mile to reach this quinzhee playground.

Earlier in the winter, it was constructed by the naturalists and Naturalist Fellows. To build this variation on a Canadian-style snow shelter, they mounded up fresh snow, let it compact under its own weight, and then hollowed it out. (Sometimes a snowblower bears the brunt of the work.) If it were being used for winter camping or as a survival shelter, the quinzhee would have only one entrance. 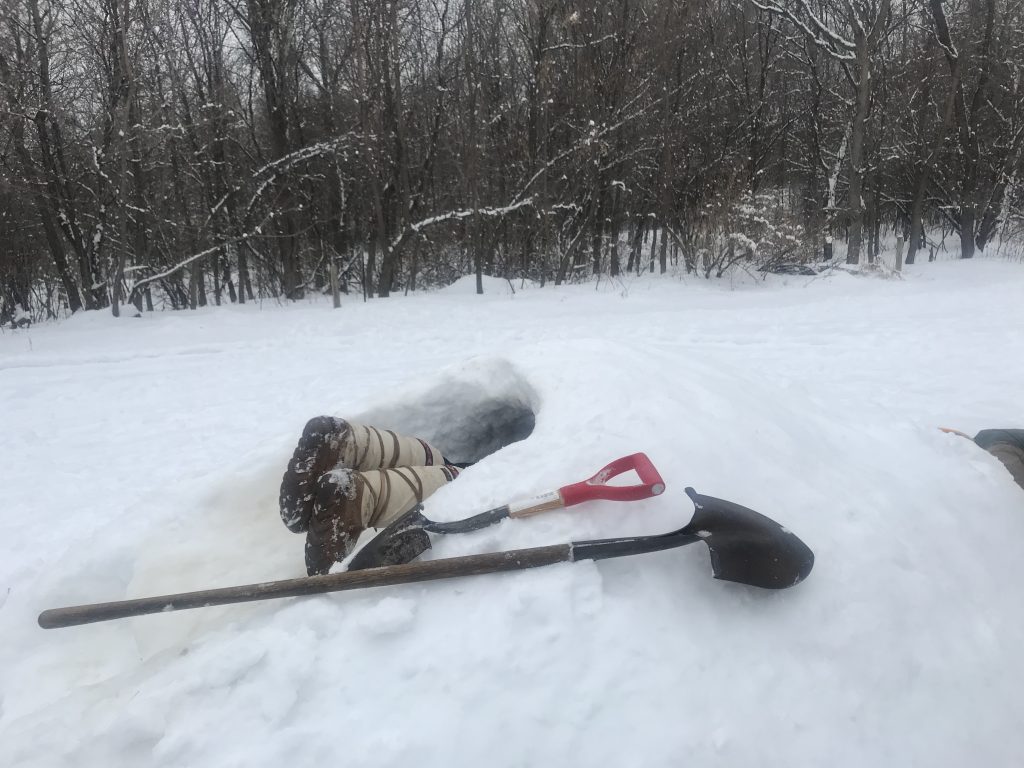 He thinks a play element is essential to all the field trip classes he teaches, especially in winter.

“Snow can be a distraction of sorts for kids,” he says. “They want to play in it, especially those that might not be getting much time playing outside at home.” So, in an “Animal Tracks and Signs” class, they play pretend, jump like rabbits, or try to replicate the patterns of tracks they find. Mick encourages kids to go off trail, and run through the deep snow.

“I’ll ask them if it’s easier to stay on the trail or cut through the snow? Let them physically understand why animals use trails—plus, it’s fun! It’s about playing and learning at the same time.”

Mick’s winter attitude and adaptations are par for course at Dodge. There are no snowbirds here on staff. Naturalists and teachers are outside every day, guiding students across Dodge’s icy ponds and snowy trails. 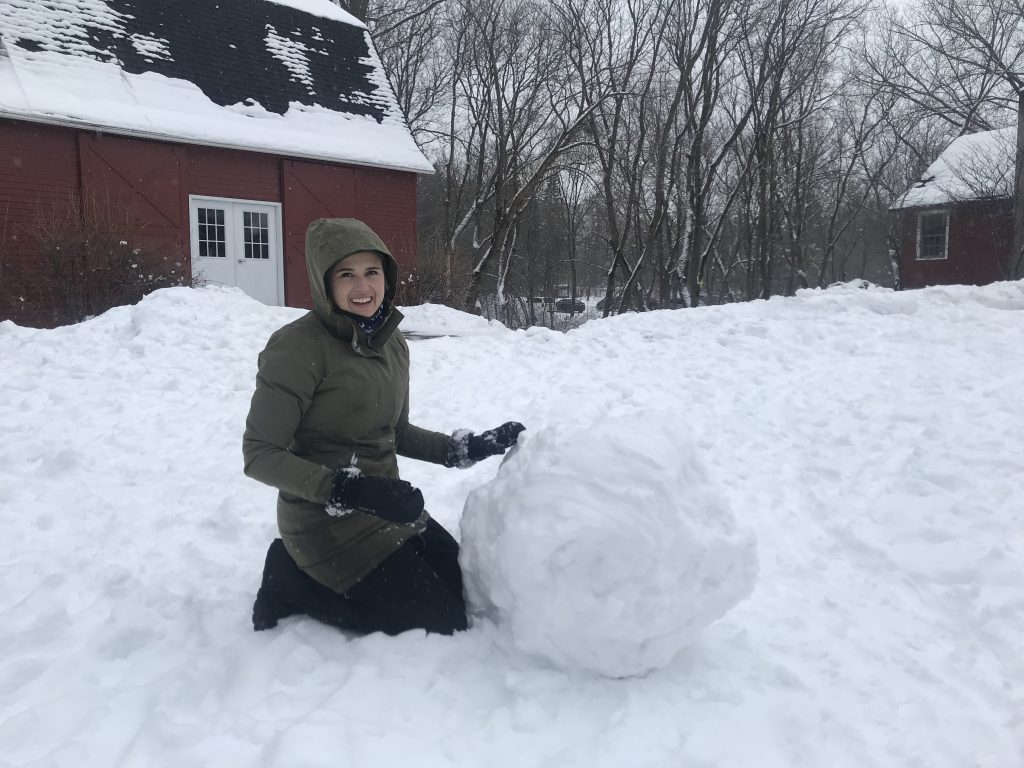 Naturalist Fellow Julia Pedersen preps the base of a snowman.

“We still have kids out every day of the week, all winter long,” says Pete Cleary, director of environmental education. “It just doesn’t stop.”

Pete says the cold months can be downtime for other nature centers. But not at Dodge. The field trip schedule is regularly filled up.

“Our staff is super good at getting kids outside even on the coldest days,” he says. “It’s about maximizing the learning. A little bit indoors, a lot a bit outdoors.”

One Dodge field trip class is available only in the cold months: Winter Technologies.

“It’s all about how people use technology and invention to make it through winter,” Mick says. “We don’t hibernate, go dormant or grow thicker fur. We have to adapt.”

He asks kids to consider what advantages slippery ice and snow might have. He lets them test out traveling across a frozen pond or hardpacked snow on a kicksled, a mode of transportation developed in Scandinavia (and a direct translation of the Finnish word potkukelkka). 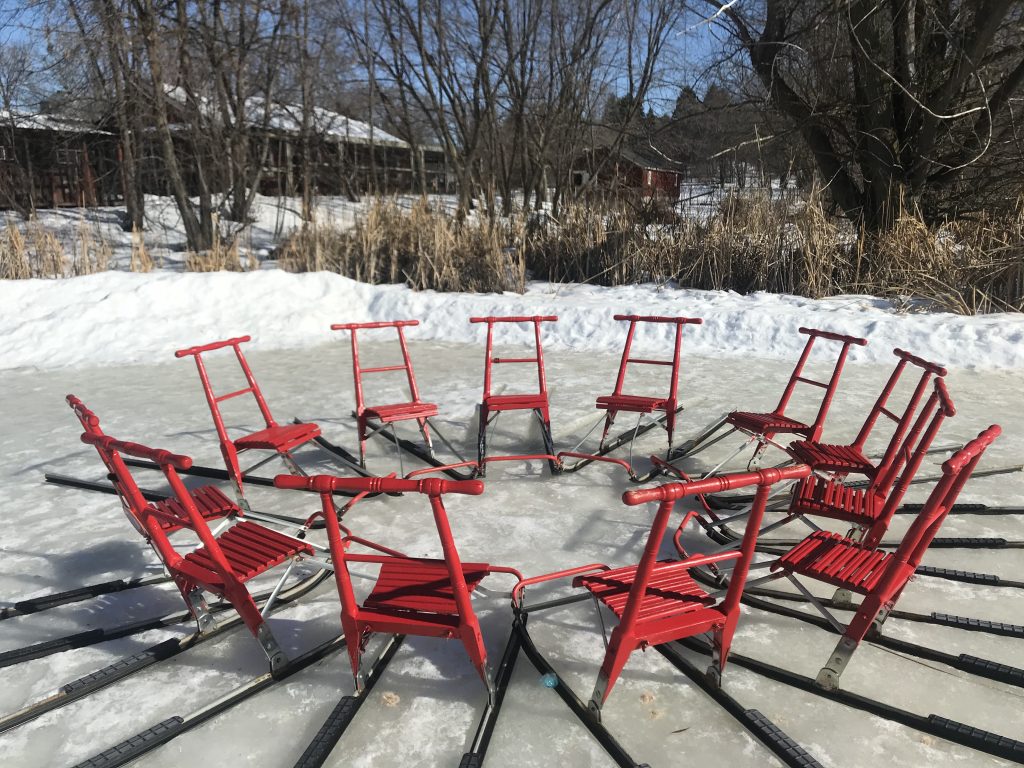 Child-sized kicksleds on the Farm Pond.

On the Farm Pond, students auger into the ice to measure its thickness—and get a whiff of the decomposition happening even in the depth of winter. Naturalists need to regularly monitor ice thickness. They want it to be at least 6 inches before bringing kids onto the pond; it was 17 inches by mid-February.

Kids team up to record data like snow depth and air temperature, too. They look for muskrat houses, and draw up the minnow trap to check for creatures living under the insulating blanket of ice and snow.

“Even in Minnesota, a lot of kids haven’t been on a frozen pond or lake before,” Mick says. “Some freak out at first. But we get them out there to collect scientific measurements and have fun.” 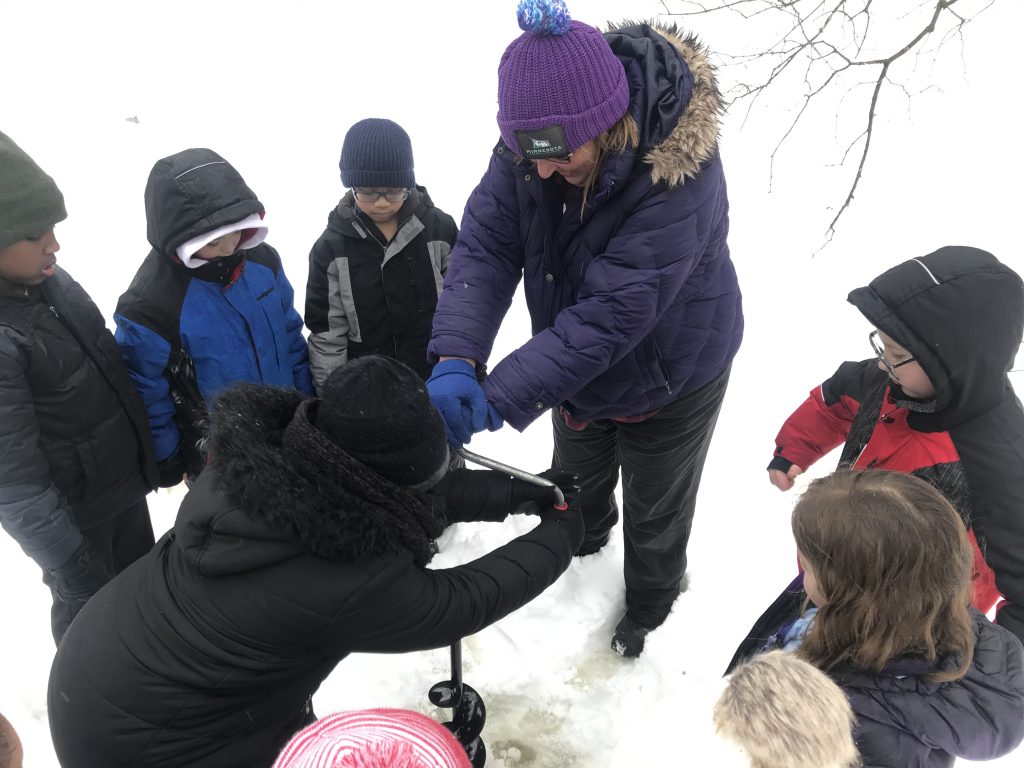 And kids aren’t the only ones putting winter technologies to good use.

At Dodge programs and events like “Love in the Wild” and Winter Fun Fest, people can have the rare treat of riding in a one-horse open sleigh.

When two horse brothers moved from Iowa to Dodge’s farm six years ago, they came trained to pull a sleigh. Tony and Terry are crosses between a Morgan horse, an American breed prized for its versatility, and a Percheron, a French heavy draft-horse. The sleigh was made by Mennonite craftsmen, and can accommodate a single horse or a team.

For three to four weeks before the event, farmer Don Oberdorfer hitches up the horses and puts them through their paces several days a week.

“I need to get them back in shape and used to the equipment again,” Don says. “They’re going from standing around to working. They’ve got to build up their stamina to pull people around for hours.” 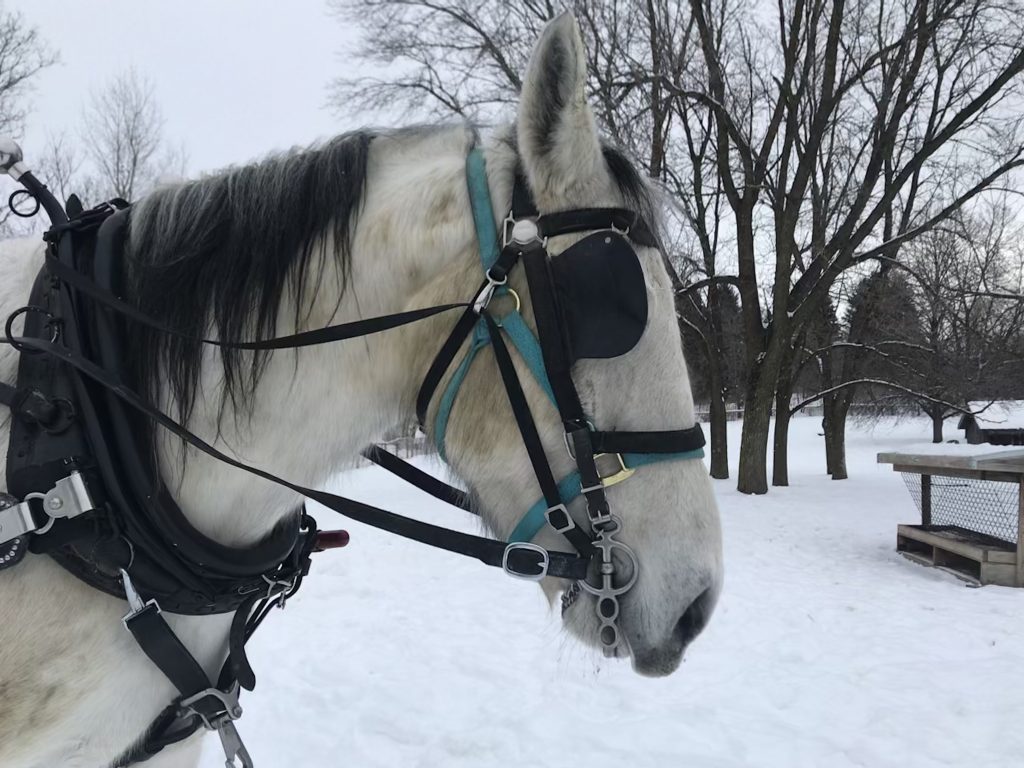 Terry, a Morgan-Percheron horse, in harness for sleigh rides.

Once the snow melts and the grass returns to the pastures, he will harness the horses behind a wagon, and get them ready for Rock the Barn on May 16.

For many Dodge visitors, their first animal encounter comes right after they park their car in the Marie Avenue lot. They may hear the hoarse call of a Red-tailed Hawk, and follow it to a long, open-air building. In the Voight Raptor Mews, they will find Dodge’s three avian ambassadors: the hawk, a Bald Eagle, and a Barred Owl. All have injuries that prevent their return to the wild.

The three birds are puffed up on their perches. Visitors in winter might wonder: Are those birds warm enough?

“Yes!” says Pam Welisevich, a Dodge naturalist and animal care coordinator for the last 17 years. “In general, it’s best for them to be outside.” 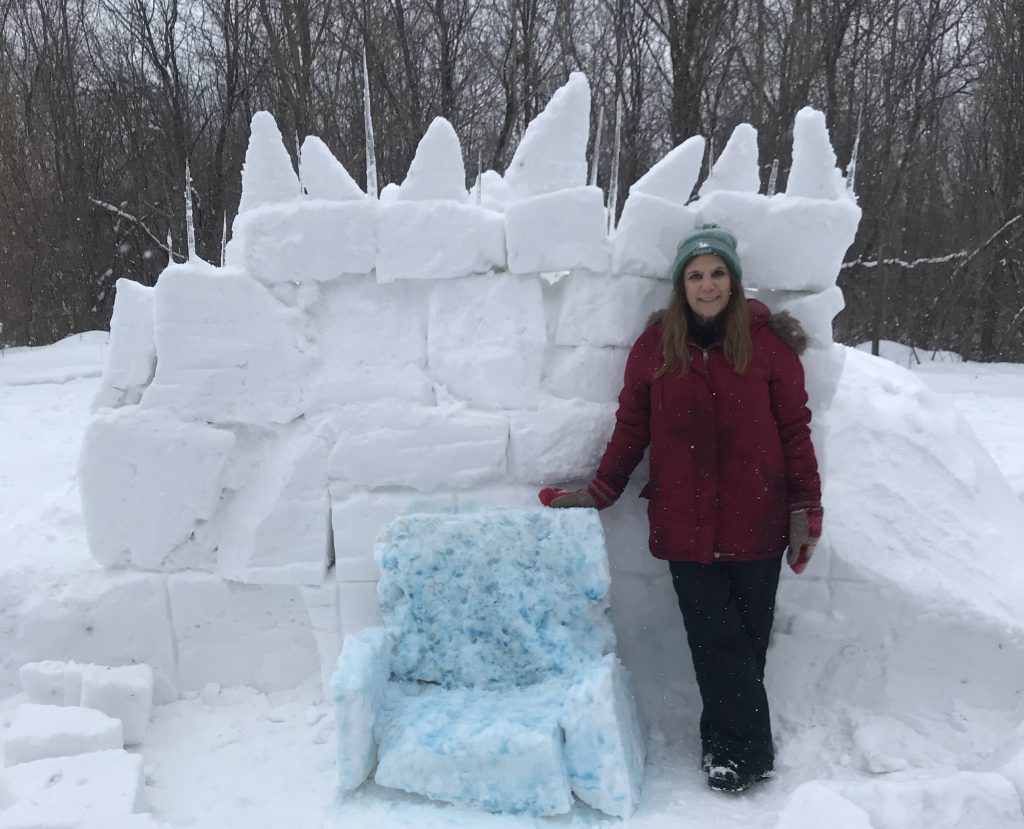 Naturalist Pam Welisevich with an ice palace constructed for a Frozen-themed program.

She says the owl is comfortable even to 20-below. While Bald Eagles would migrate south in winter to find open water, their bodies are adapted to the cold. That’s why you can spot eagles on the Mississippi River near downtown St. Paul, she says.

Pam adapts the raptors’ enclosures for winter. Adjustable panels block the wind. The eagle has a heat panel in his cubby. Water dishes are removed, because the eagle and hawk like to bathe.

“For them to get wet is far worse than just being cold,” Pam says. “And they get all the water they need from their prey.”

The birds eat a rich variety of prey, as they would in the wild: rats, mice, rabbits, squirrel, chicks, quail, fish. In winter, Pam increases their calories and lets the birds put on some weight.

“But it’s a fine line,” she says. “We don’t want them to get obese. That causes all sorts of health problems.”

She weighs them on a regular basis; the owl is weighed daily, and the eagle and hawk once a week. All the birds are trained to step up onto a handler’s glove and then the scale.

“Weight is the biggest indicator of health," she says. “Either a loss or an increase can tell me there’s a problem.” 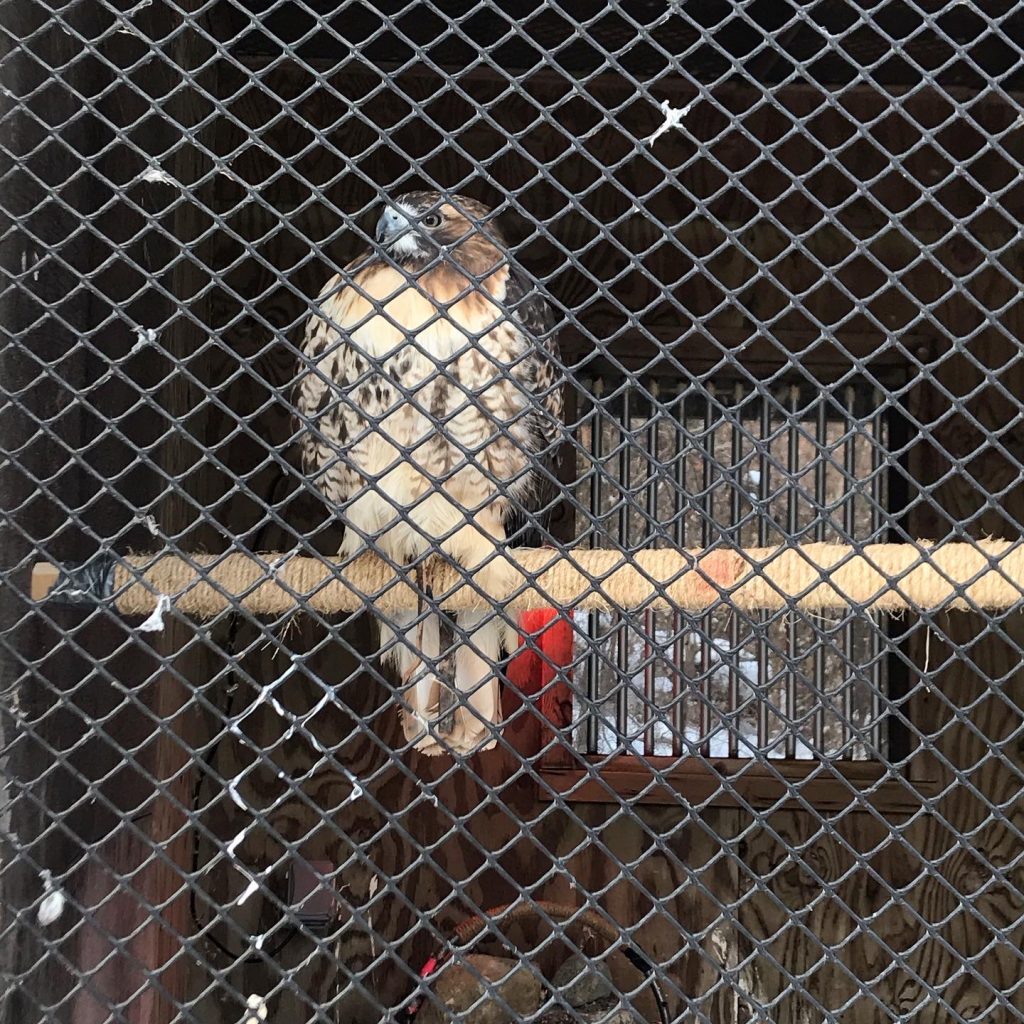 To stay abreast of best practices in raptor care, Pam meets yearly with colleagues from other nature centers. She consults often with The Raptor Center at the University of Minnesota in St. Paul.

“They’re my go-to,” she says. “They’ve taught me how to do aftercare for frostbite, broken talon sheaths, mites and parasites.”

Dodge’s raptors go to the U for veterinary care, but Pam provides a lot of care in-house: basic first aid, trimming beaks and talons, and vaccinating against West Nile virus.

These birds may live twice as long as they would in the wild, due to excellent nutrition, and protection from predators, disease, lead poisoning, and vehicle strikes. Pam is prepared to care for them into advanced age, when cataracts and other conditions may develop.

And she knows their strengths and their limits well. One February afternoon, when the temperatures were predicted to dip to -13° F and windchill to nearly -40° F overnight, the raptors were brought inside a heated building, to take a rest from winter’s worst.

Otherwise, the fields and farmyard are quiet and still in the winter months—especially compared to raucous spring and summertime. That’s because, excepting the horses and cattle, the farm animals are bundled up in the barn and coops for the winter. 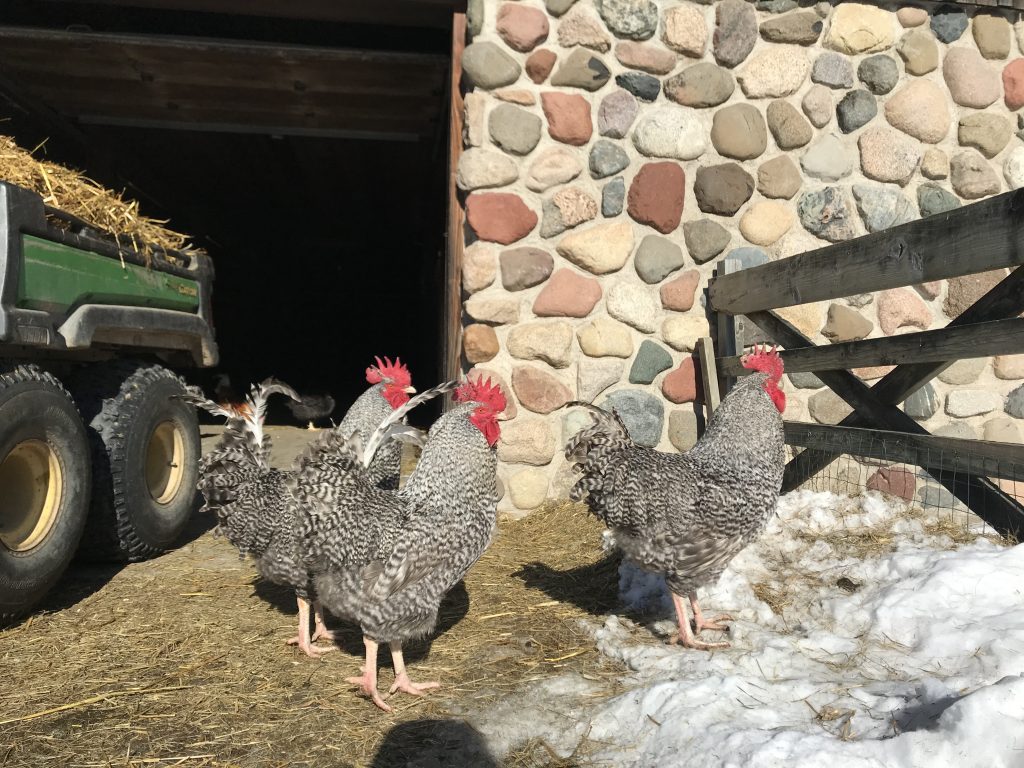 The horses’ coats thicken naturally in winter, so they can be outside and don’t need to wear blankets, Farmer Don says.

“If a horse stays in a barn all winter, they wear blankets because you shave down their coat,” he says. “But these two need to be outside to run. They get antsy if they don’t get out.”

At Dodge’s Shepard Farm property in Cottage Grove, cattle spend the winter out in the pastures. Their shaggy coats, a small shelter and a heated water trough will get them through to spring.

In contrast, he says sheep love to lie around in the barn—warm, woolly and out of the wind. 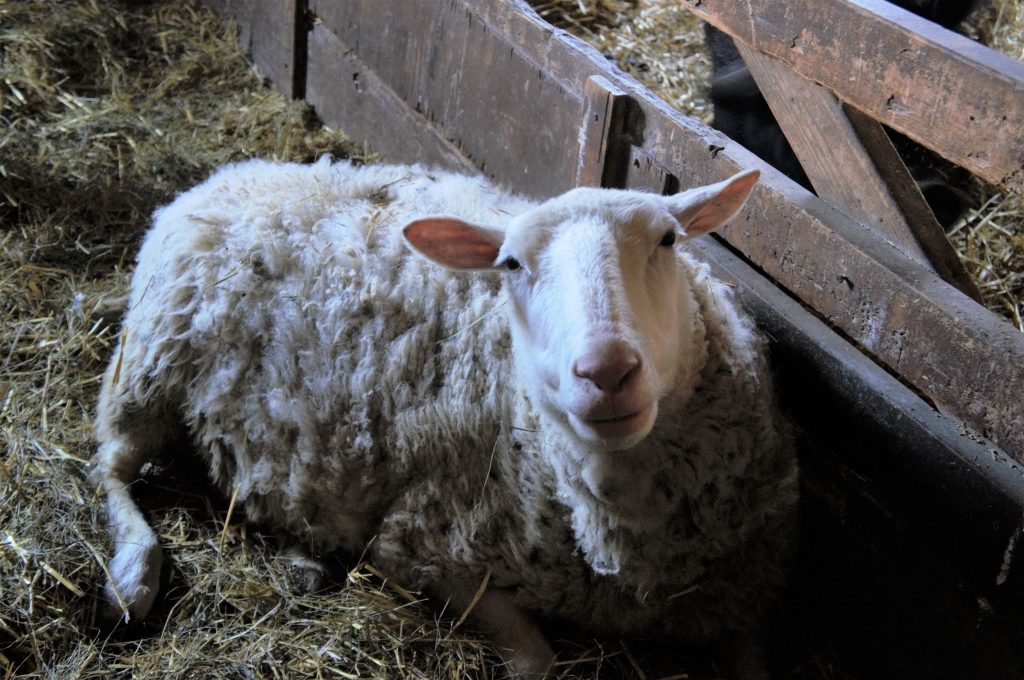 An ewe cuddles up in the barn for the winter.

Don says the barn is open to the ambient outside air temperature, but feels warmer because of the wind break and the heat of animal bodies. He keeps the windows open if the temperature is above 10 degrees; when it’s colder, he will batten down the barn. The chicken coop will get a heater when it’s below zero.

All the animals will be back outside once the grass is established and the ground is dry.

“It’s later than people want,” Don says. “They want to see them outside in springtime, but it will turn the pastures to mud.”

Until conditions are right, he’ll keep the animals inside and well fed with hay. Then—not all that different from humans on spring break—the animals will be turned out, to stretch their legs, eat fresh food and soak in the sun. 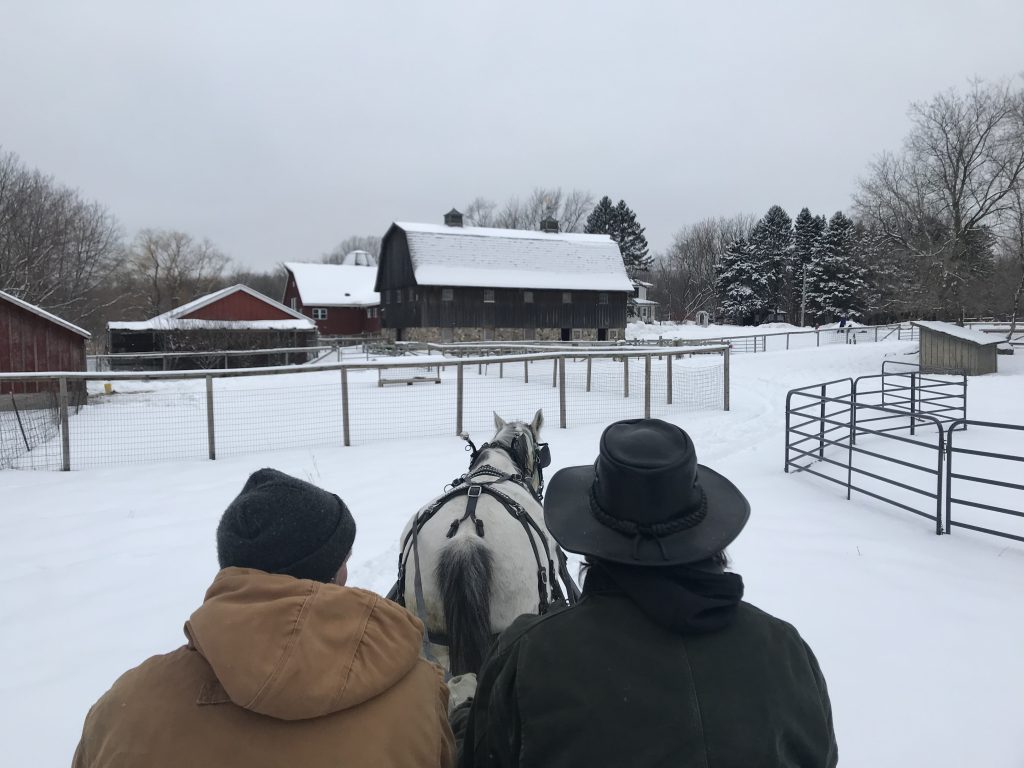 Eager to try some winter technologies and snow sports for yourself? You can! Come to Dodge for Winter Fun Fest on Saturday, February 22. Free admission for all.