Gingerly reaching tongs into the embers, kids retrieve a football-sized chunk of charcoal from a fire pit. Only this blackened lump isn’t quite what it seems. The young cooks slice into it, revealing it’s not a briquette, but a butternut squash, roasted in the fire within its own shell. They sprinkle it with maple sugar and dig in with spoons. 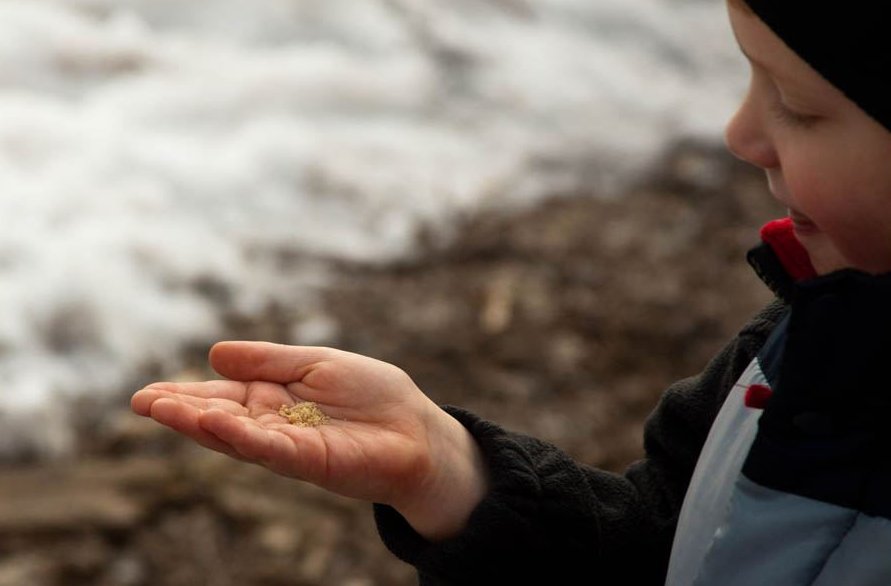 A student holds a handful of sweet maple sugar.

These modern-day kids happily devouring their vegetables are Dodge campers, guided by staff who are game for adventures in the outdoor kitchen.

Through the decades, as Dodge Nature Center and Preschool have grown and changed, campfire cooking has been a constant. It’s a feature of camps and most everything Dodge does: family programs, festivals, field trips and the preschool.

“Cooking has always been an important part of Dodge,” says naturalist Mick Garrett. “It’s been around forever. And it’s great for kids of all ages.” 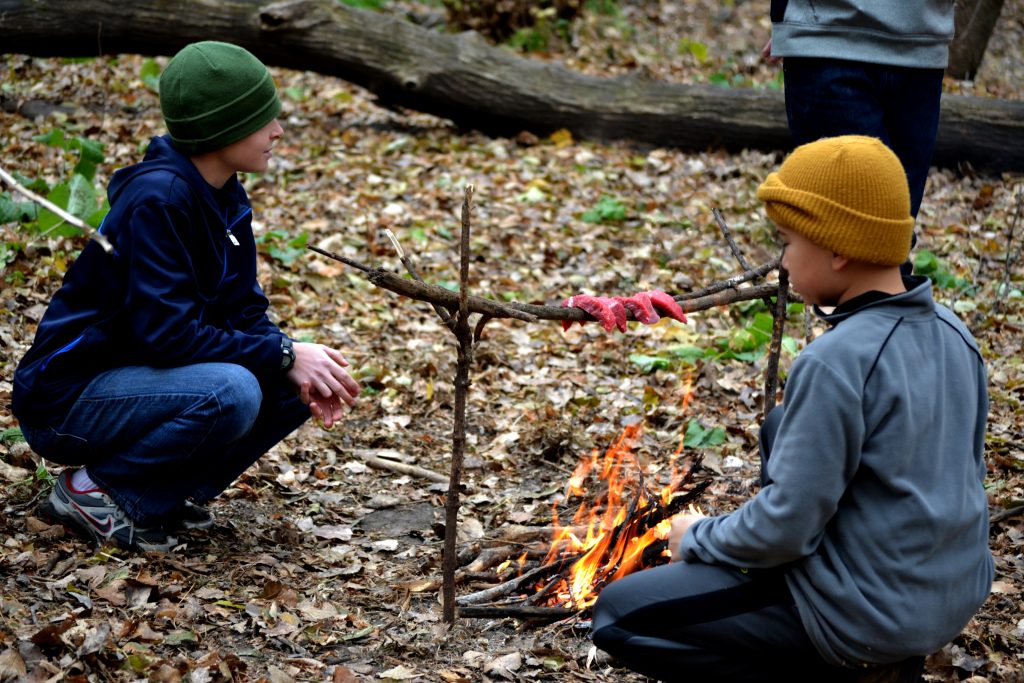 Campers roast strips of meat over a campfire.

Kids’ interest in campfire cooking keeps growing every year, says Pete Cleary, director of environmental education. So, in addition to offering camps dedicated to cooking, Dodge incorporates a make-your-own-meal element into almost every type of camp.

Trial (and error) by fire

Dodge staff aren’t content with just the traditional standbys of s’mores and Little Smokies. Naturalists and teachers have a willingness to experiment, Pete says. They often take recipes from the indoor kitchen and modify them to work in the outdoors for large groups of young students.

For his famous stick bread recipe, Mick tweaked an Italian bread dough so that it would bake thoroughly when wrapped on a stick and twirled slowly over a fire. 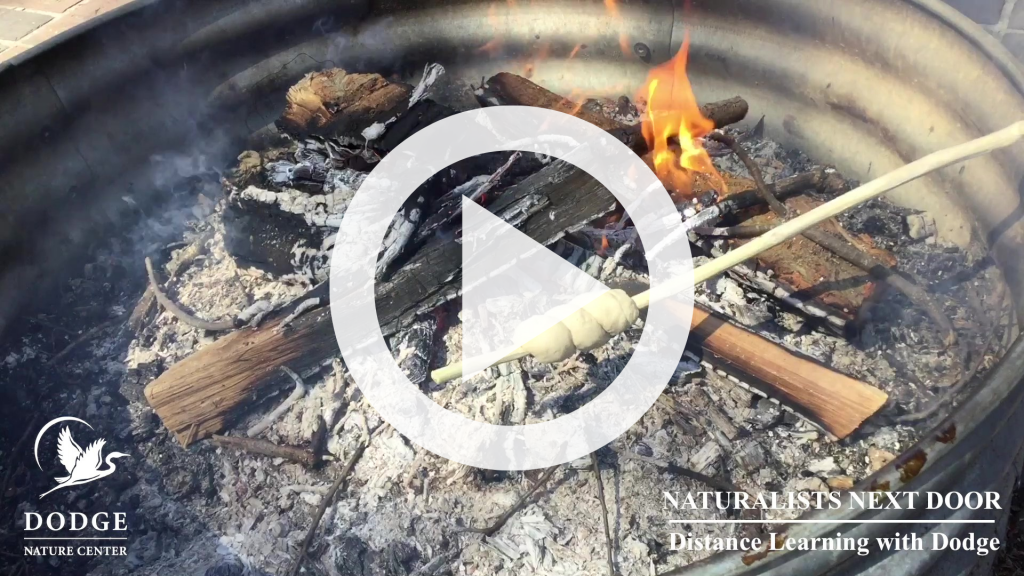 Watch Mick show you all the tricks to mix dough, spiral it on a stick, and twirl 'til it’s toasted.

But as any scientist can tell you, with experimentation often comes failure. Recipes don’t always adapt well to open-flame cooking. Food falls in the fire, ends up under cooked or burnt to a crisp. Mick says it’s important for adults to model an “oh well” attitude about food that goes down in flames.

“Many things are lost to the fire, but that’s part of the learning process,” he says. “Turned out horribly? Try multiple times then.”

When he teaches young kids how to crack and scramble a fresh egg from Dodge’s chickens, he knows to expect missteps and a mess. 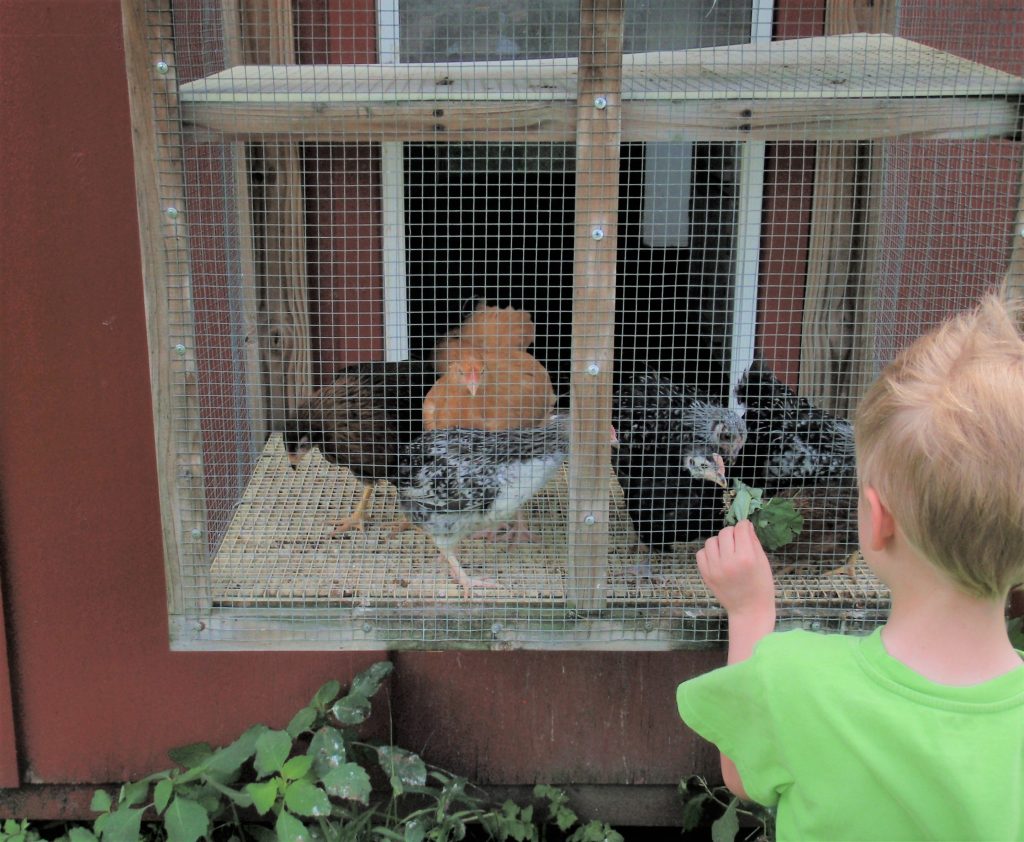 A camper gets up close to a few friendly chickens.

“There’s lots of shouts of ‘Mick! I missed,’ and eggs spilling everywhere,” he says. “But that’s a totally acceptable loss.” So that kids don’t give up, he always keeps extra ingredients on hand.

And bad mistakes? They’ve made a few. Many years ago, Mick and naturalist Teresa Root tried to cook orange brownies with kindergartners. Their delicious idea was to have kids hollow out the orange, fill the peel with cake mix, wrap it in foil and put it in the fire.

“Well, a certain dexterity is required that isn’t there for the average kindergartner,” Mick remembers. “It went horribly awry. Kids were just hacking at oranges with spoons.”

It was a lesson learned by all—match the age group to the task.

Irons in the fire

In every cooking and outdoor skills camp, Mick teaches the fine art of fire building. From experience, he knows kindergartners and first graders can master starting fires with matches. Upper elementary and middle school students can tackle trickier methods. 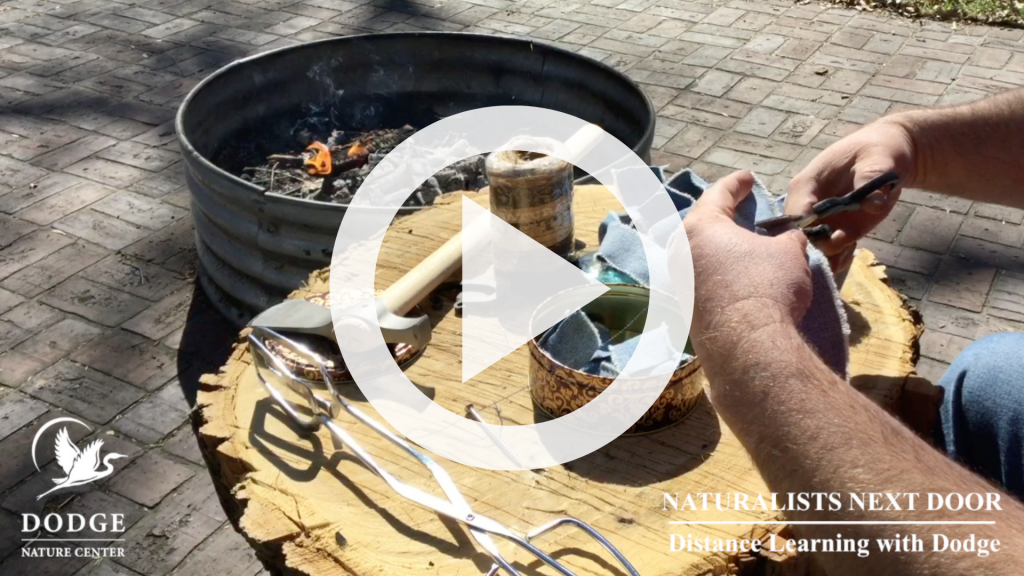 Over the course of a multi-day camp, kids move from the fundamentals to more advanced skills. They learn to match recipes best made over flames versus those better suited to burned-down coals.

“We start with roasting marshmallows, but catching on fire is not our goal,” Mick says. After they achieve the desired golden-brown goodness, they can go darker. “They can burn it like a charcoal briquette. Some kids just like it better that way.”

Popcorn is also on the easy end of the recipe spectrum. Pete says old-fashioned popcorn poppers are so popular with kids that Dodge regularly replaces ones that break from heavy use.

As he’s not a fan of s’mores, Pete developed a hybrid treat. Mix roasted marshmallows in with fresh popcorn and—voila!—you’ve got marshcorn. Perhaps as part of Dodge’s zero-waste efforts, he has also been known to pop kernels in bacon grease left over from farm breakfasts. 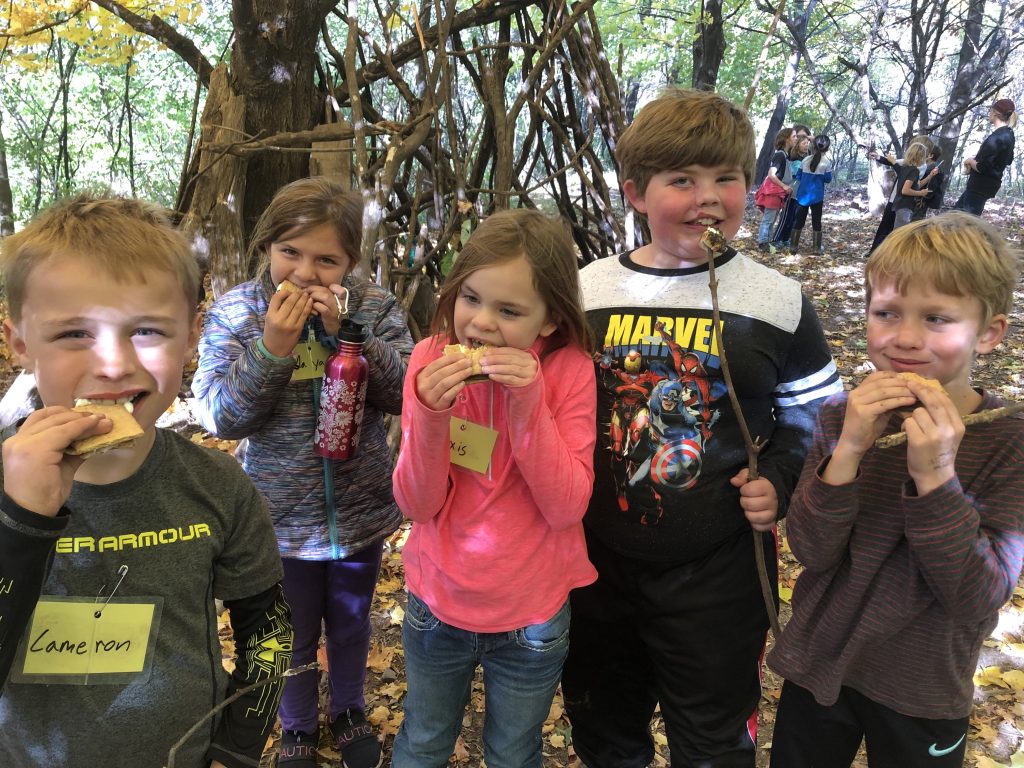 Corn on the cob comes next. The Dodge way to roast corn is to husk it, break the cob in half, and poke through the center with a sharp tool like an awl. Then slide it on your stick and slowly rotate over coals.

“Let it get golden, caramelized and sugary corn colored,” Mick says. “It’s not about a set amount of time.”

He says this is skill building (not to mention tasty). Kids have to use visual cues and adjust how fast they’re spinning the cob and how close it is to the coals. The process has its own reward: rolling the perfectly cooked corn in butter and eating it right off the stick.

“Using your eyes is sometimes hard for kids but a great learning experience,” Mick says. “If they’re patient and get these initial skills, then we can cook all sorts of things.”

Dandelion fritters are a longtime Dodge tradition. Pete has peers in Dakota County that remember fritters from their school days decades ago.  He says at one point the recipe was a highlight of a Wild Edible Plants class for 6th grade students. Every kid picked flowers, battered and fried up the yellow blooms. 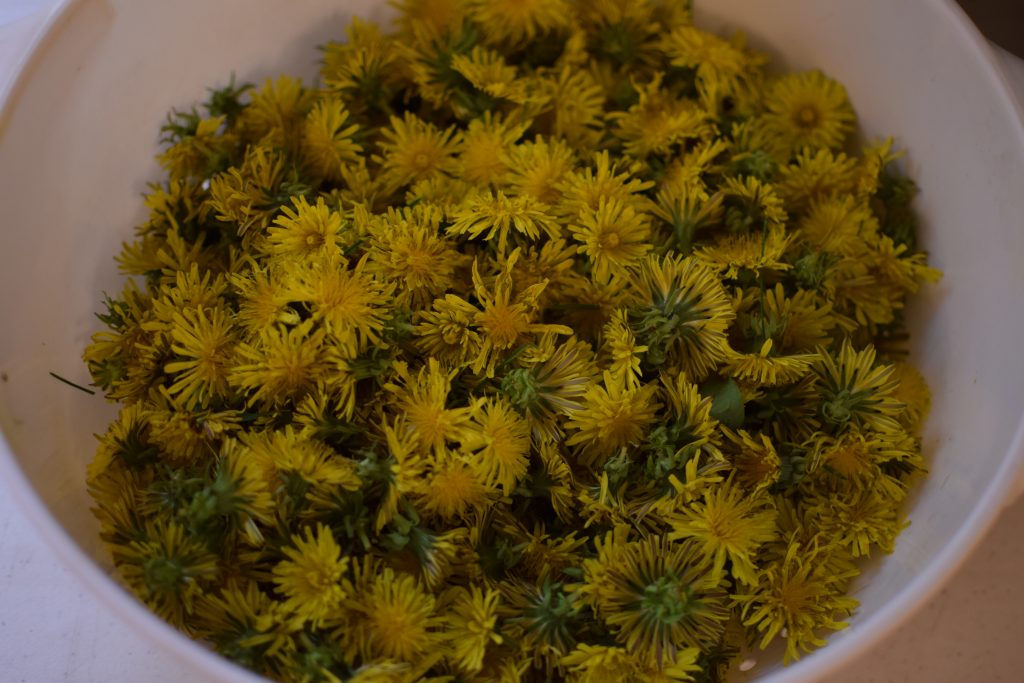 When the state science curriculum changed in the mid-2000s, dandelion fritters moved to camps and the annual Rock the Barn festival.

Dandelions work well because of their big flower heads, but when they are sparse in springtime or recently mowed down, Mick is ready to redirect kids to other edible plants around them. “Many things can be ‘deep-fried nature,’” he says. “Clover flowers, wild onions, rhubarb, veggies.”

“We follow the rule of the State Fair. If you batter and fry most anything, it will be yummy.”

The batter is instant pancake mix, with less water added than suggested on the package. After the fritters are cooked, toss in salt or powdered sugar. If your tastes turn toward the savory, chop wild onions into 2” pieces, fry, and you’ve got onion rings au naturel. 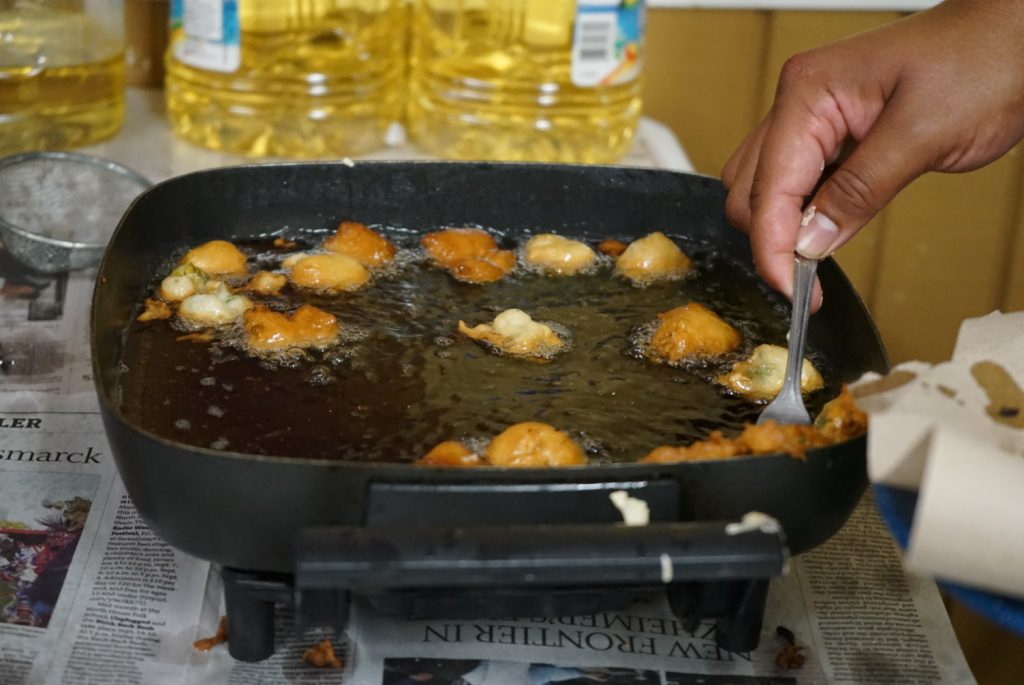 Golden and crispy fried dandelions, a staple at Dodge's annual Rock the Barn.

Though Dodge doesn’t shy from less organic ingredients. At a frigid and flowerless Rock the Barn, Mick raided the bake sale for sweet treats. Not surprisingly, deep-fried Rice Krispie bars and chocolate chip cookies were big hits. But word to the wise: Mick says a battered stick of butter just makes a mess.

Taking a page from the Stone Age

It was at a spring break camp called Stone Age Technologies that kids roasted the butternut squash whole. They explored all sorts of fire-making and cooking techniques of Paleolithic people.

Telling the campers “this should work in theory,” Mick gave a brand-new recipe a go. They poked pea-sized holes in the tops of chicken eggs, then nestled them in the coals, hole side up.

“Two exploded,” Mick recalls. “One was underdone and had a soft-boiled consistency. But one was perfectly hard-boiled and cracked open when it was pulled out of the coals.”

Foraging safely in the forest was an essential skill of ancient people, and just as needed in wilderness survival situations today. At Dodge, when campers gather wild ingredients for swamp soup, they learn to ID nontoxic plants and how to purify water. 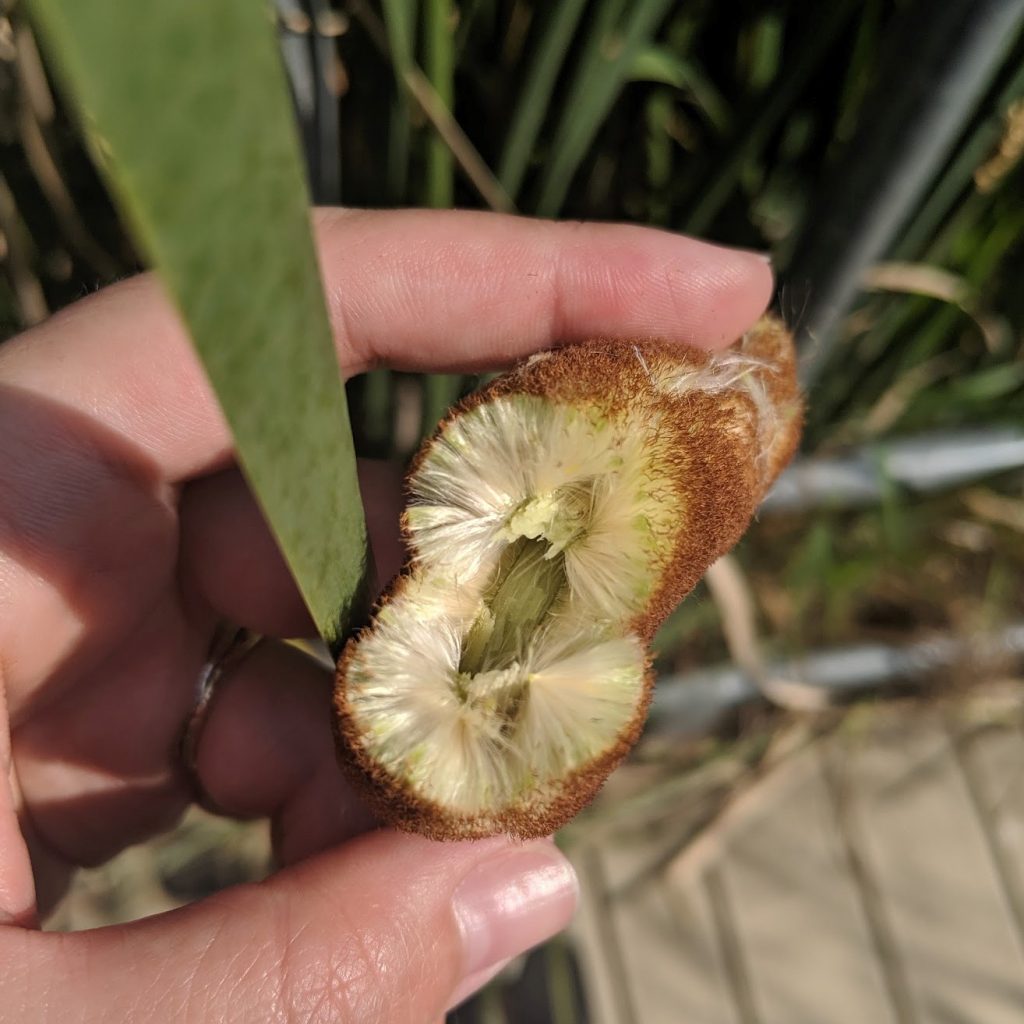 A cross section of a cattail, one ingredient in swamp soup.

Swamp soup is definitely green cuisine, a stew made from stinging nettles, cattails, wild onion, chicken bouillon—and sometimes water scooped from the Farm Pond. While campers could eat the bottom white part of cattail plants raw (Mick says it tastes like cucumber), for soup they chop it into small pieces and toss it in. Keeping the water at a rolling boil for a long time removes the stinging part of the nettles and kills waterborne bacteria that would sicken humans.

And then they dine on their marshy mixture, leaving not a leaf or a drop in the soup pot.

Trying it in your firepit

While nature programs and camps are canceled due to COVID-19, outdoor cooking is a great way to bring a little Dodge into your yard.

“Just try it,” Mick says. “View it as a learning experience.”

You can use your grill or firepit to recreate these Dodge recipes, he says. He uses three primary tools when cooking with kids: cast iron skillets or Dutch ovens, aluminum foil, and sticks scavenged from the woods. To keep your kitchen cool, make your summer supper outside with foil packets or baked apples. 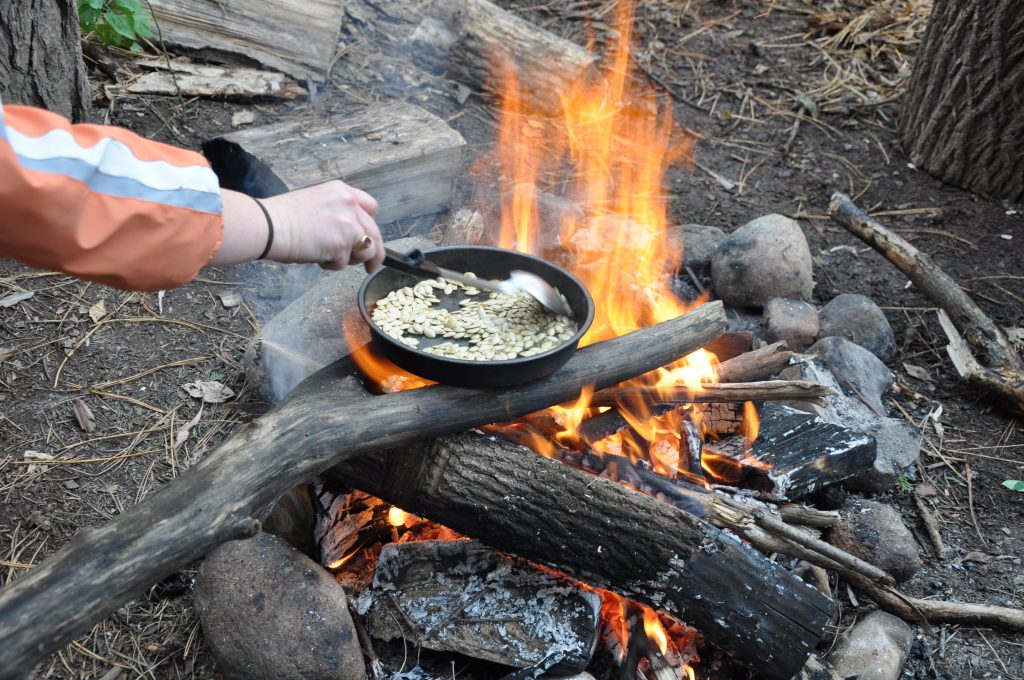 Fire, cast iron, and food is all you need to try firepit cooking!

And your campfire cooking just may expand your kids’ palates.

“Part of what makes it taste good to kids is they’re the ones cooking it,” Mick says. “How many kids would devour a whole squash? But it was theirs – they made it.”

Like at Dodge camps, new discoveries are certain when you give kids the skills, tools and free rein to cook over a fire.