Magic and nature of teaching

The kindergartner and the naturalist were trailing white-tailed deer deep in the woods at Dodge. Together, they weaved through drifts of snow, tracking the heart shapes left by hooves, almost as if they were puzzling out a Connect the Dots.

“Then we found scat, and followed farther, and eventually found a bedding site,” remembers Siri Block, one of Dodge’s Naturalist Fellows. “We acted like deer to see how close we could get to them and ended up getting within 10 feet.”

On that winter day, teacher and student didn’t know where the deer path would lead, but they were game to go. “I was asking guiding questions and helping them find their own answers, instead of telling them the answers,” she says. 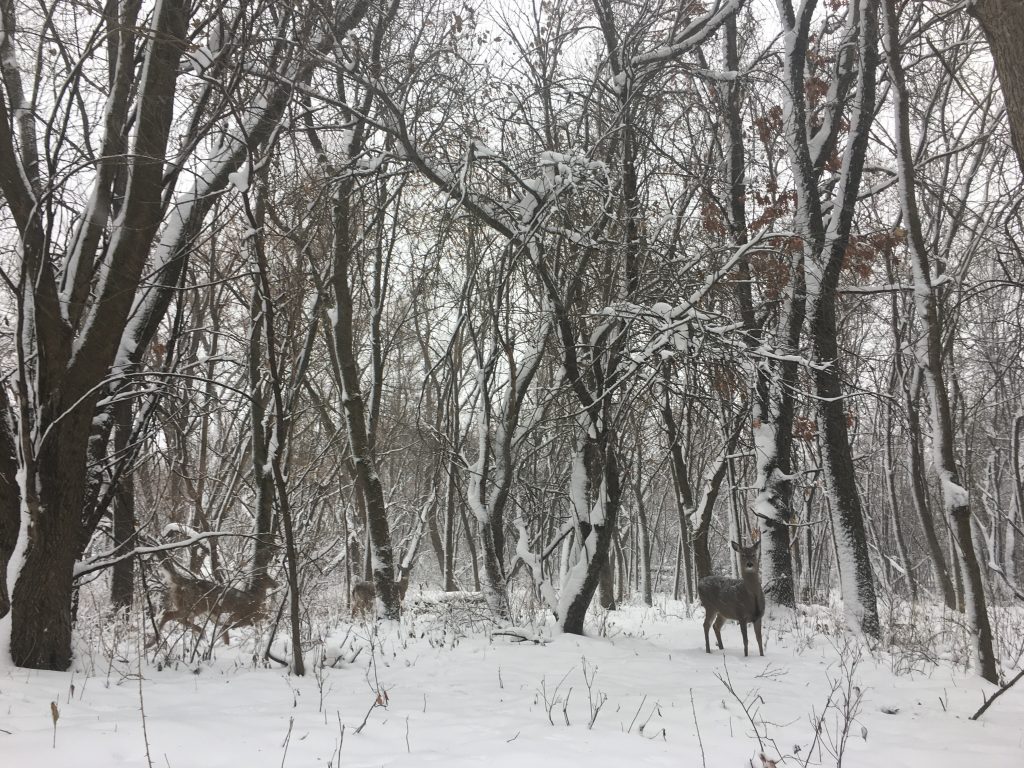 White-tailed deer in the snow-covered woods.

For Siri, this was a shining example of improvisational learning. It was part of her favorite class, Animal Tracks and Signs, which she says is largely kid-led.

“You are the detectives,” she announces at the start of each tracking class. “You get to decide where we get to go today.”

But as of late, special teaching moments like this have been a little hard to come by.

Since March, Dodge in-person programs have been on hold due to the global pandemic. While field trips, nature programs and community events like Rock the Barn are canceled, that doesn’t mean naturalists are off the clock. They’ve just taken their teaching from outside to online. 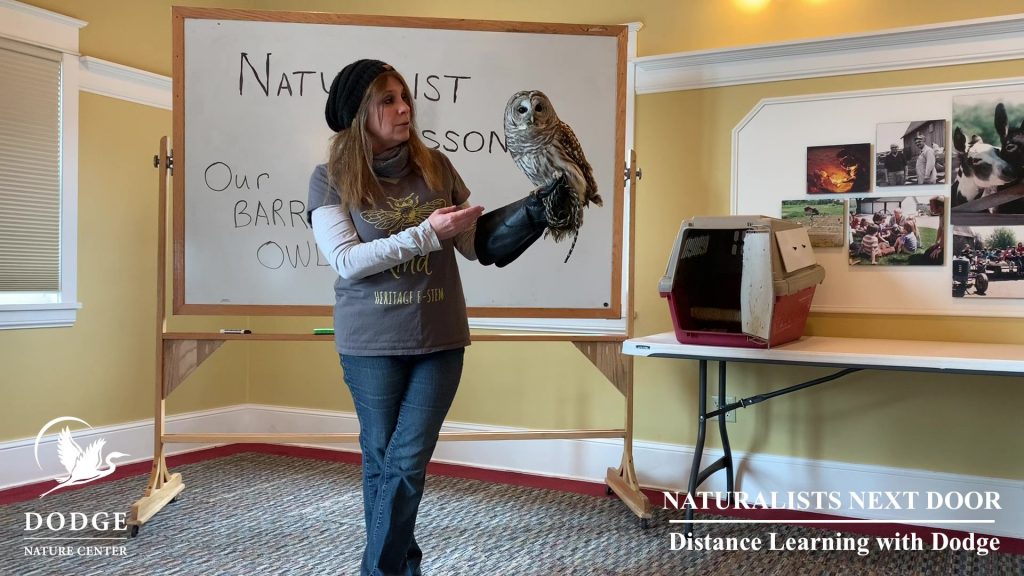 Dodge naturalists are branching out in new directions by producing distance learning videos, family activity worksheets, even wildlife coloring pages in the case of Naturalist Fellow (and talented artist) Ashley Johnson. Naturalists also maintain their relationships with students they taught all year at Garlough Elementary and Heritage Middle School.

Cumulatively, Dodge naturalists have over a century’s worth of experience as educators. They can tune their teaching to any age group, from the very young to seniors. They’ve developed curriculum for over 40 topics, from the Air Around Us to Winter Technologies. Their classes fulfill Minnesota state standards in science and social studies, while also inspiring curiosity and care for the natural world.

As creative as COVID-19 is compelling them to be, Dodge naturalists definitely miss the joys of teaching in-person. We asked them what subject they like to teach best (and why) or to tell us about a special teaching moment.

For naturalists Mick Garrett and Mary Dybvig, no class is sweeter to teach than Maple Syruping. It’s also a perennial favorite of students and families–not all that surprising as they get to taste the sweet product of Dodge’s maple trees.

Both Mick and Mary appreciate the multidisciplinary nature of the class.

“I like that it’s a combination of history and science,” Mick says. Students compare and contrast the historical aspects of how people used to make sugar versus the modern method of using a mechanical evaporator in the sugar shack.

Field trip classes begin by discussing how, long ago, Indigenous people in North America discovered how to process and use the sap that flowed from maple trees. Then kids get outside, in the snow and mud, as winter’s chill gives way to warmer days.

“We’re all in such a hurry every year for winter to be over and spring to start,” Mary says. “This is a class that can remind us of the beauty of that in-between time. We don’t want to rush that transition. It’s really a magical thing to be able to make maple syrup.”

Naturalists put the kids (and chaperones) to work. They gather firewood, tap the trees with a real drill and hammer, collect buckets of sap and haul them to the kettle. Trudging over snow and uneven terrain with sloshing buckets is tough for kids and adults alike.

Over the years, Mick developed a way to teach the class in a problem-solution manner. 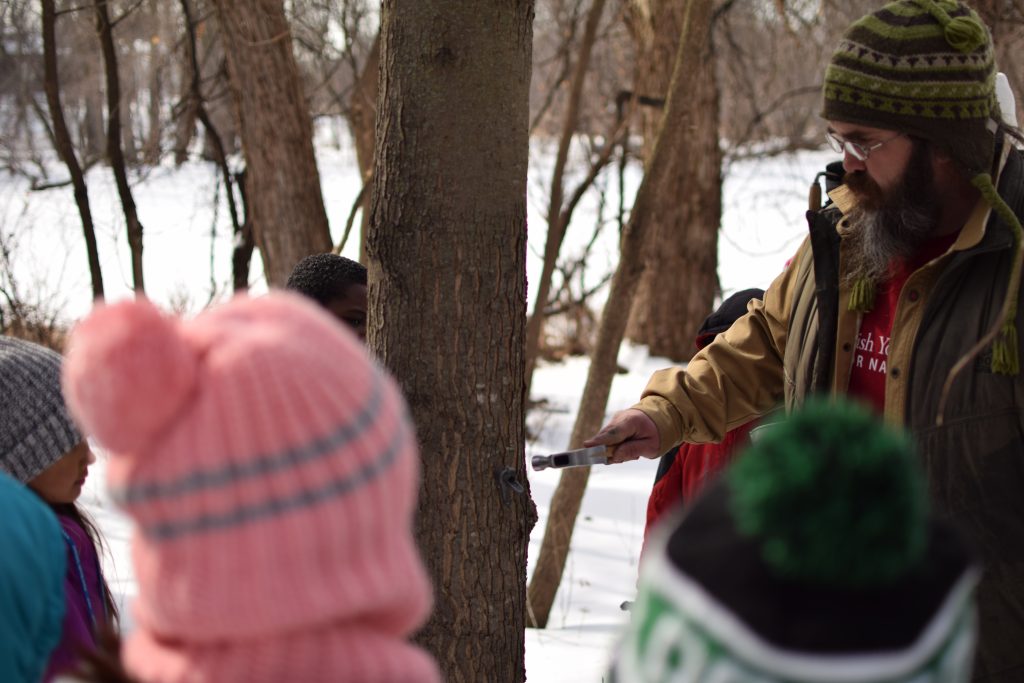 “We want syrup and sugar—that’s the problem,” he says. “So, how do we get sap out of the tree and turn it into syrup? And you can’t choose just any old tree. So how do you identify a maple tree without its leaves?”

Mary finds that winter tree identification is the most challenging aspect of the class for both naturalists and students. Without telltale maple leaves on branches, kids can struggle to find a sugar maple in a forest full of gray-brown tree trunks.

“The basics are easy enough to explain,” she says. “But the process of actually finding the maple tree is intimidating. With time and experience, you become more confident.”

Once kids learn these skills and put in the work, they don’t want to waste even one drop of sap. 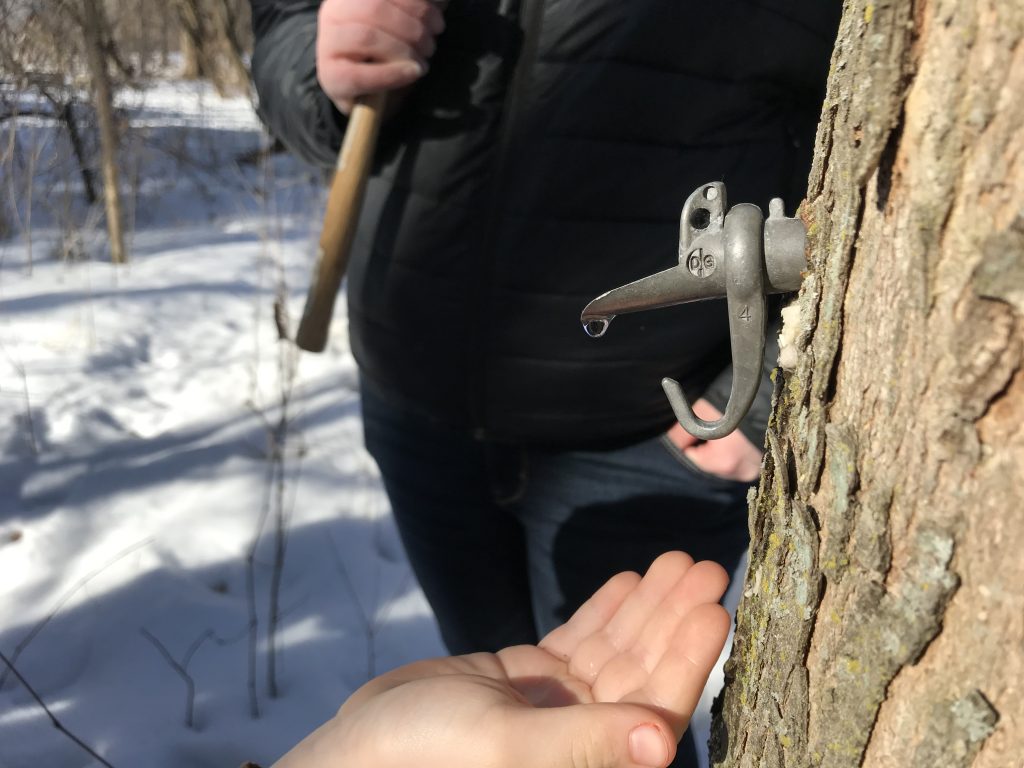 A student reaches out to catch a drop of sweet sap.

“On a perfect day for sap flow, you start drilling, and the tree just starts dripping, and the kids freak out,” Mary says. “It becomes real for them that this tree is actually producing sap. They’re so concerned about the sap dripping on the ground too. They’re so invested and it’s fun to see that.”

As kids leap these hurdles—tree identification, physical work, smoke in their eyes—they get closer to the sweet close of the class when they’ll sample powdery maple sugar and sip syrup from small Dixie cups. Maple Syruping is hands-on learning that’s memorable (and a little sticky).

“Stars can feel very distant, but this class brings them closer,” she says. To achieve that, naturalists inflated the Star Lab, a portable planetarium, in the Farm Education Building. Day or night, kids could lie down under the dark dome and travel the universe. 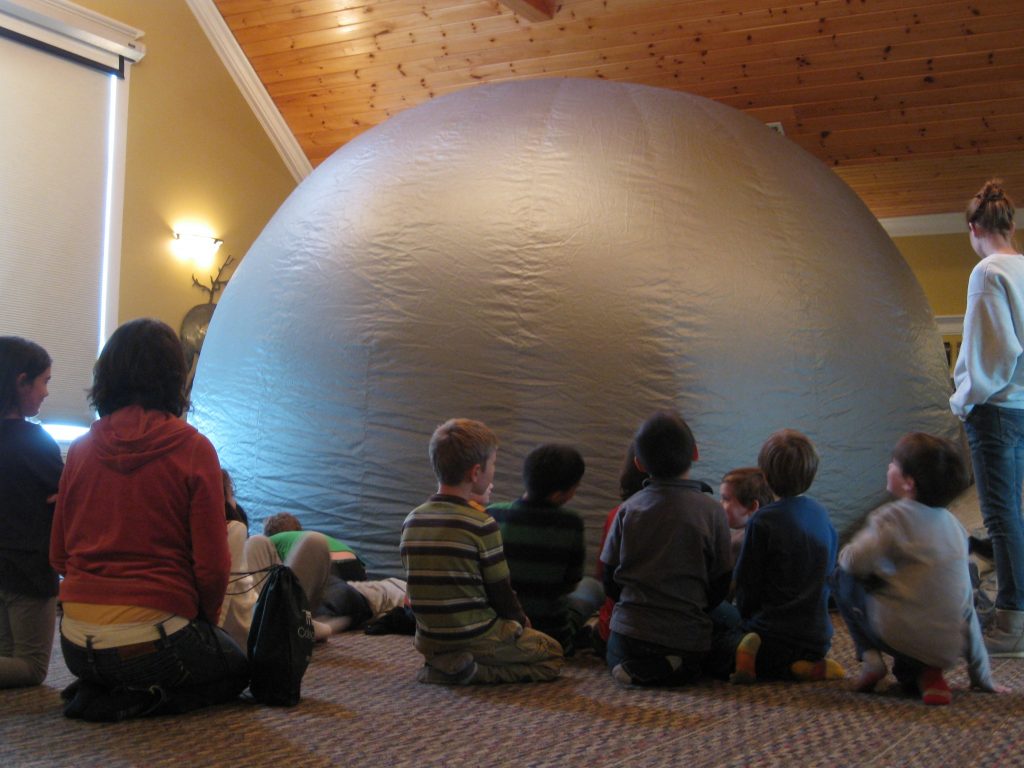 “I love hearing the audible ‘wow!’ when you bring up the projector with the stars,” Rachel says. She also enjoyed developing her voice a storyteller, helping kids locate the constellations of Indigenous people and the ancient Greeks in the stars projected above. By opening up the universe to them, she wonders if someday some of her students will become astronomers or physicists.

Julia Pedersen, another Naturalist Fellow, enjoyed exploring closer to Earth in her favorite class to teach, Seasons Hike. Instead of trekking to distant galaxies and star clusters, her classes were grounded in Dodge’s prairie, ponds and woods.

“You could bring them anywhere and it’s a great experience,” Julia says. “It’s flexible, and there’s not a right or wrong way to teach it.” 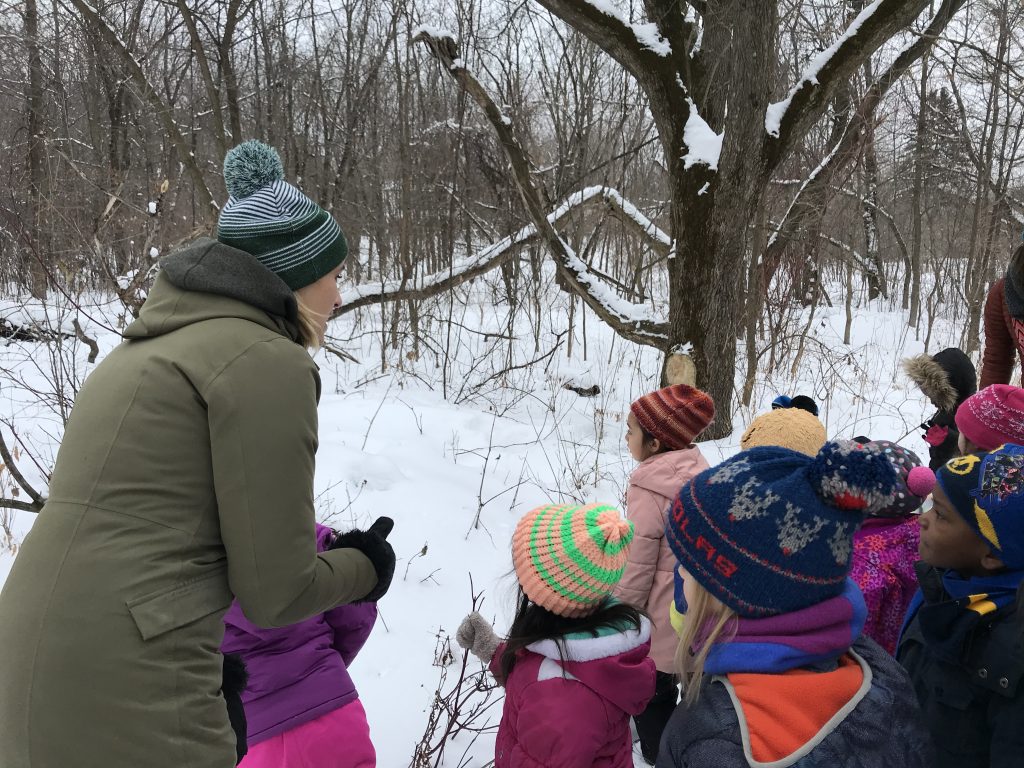 Naturalist Fellow Julia Pedersen and her students gather around to observe tracks in the snow.

When the school bus pulled up, she hopped aboard and gave a quick, 5-minute introduction. After that, the students were outside, guiding the hike by what they noticed and gravitated toward. Sometimes that was animal scat—always a fun discovery, Julia says—or bees zooming around the apiary or prairie seeds scattering to the wind.

“You really rely on the kid’s senses, what they see and hear,” Julia says. “It’s a really tactile class, and great for young kids that don’t have a lot of concept knowledge yet.”

In classes and public programs, naturalists often take supporting roles to some true superstars: the animal ambassadors that call Dodge home. Inside the Lab on the Main Property, students can view tanks of turtles and toads, several species of snakes, and one often-napping nocturnal flying squirrel. Outdoors, they might meet bees or milk-making goats. These animals attract attention while making scientific topics tangible for students.

Pete Cleary, director of environmental education, likes teaching one animal-centric, barnyard-based class so much, he could talk about it ‘til the cows come home. Only the subject is more avian than bovine.

“Chickens are my favorite,” he says. “They have much better personalities than cows.” 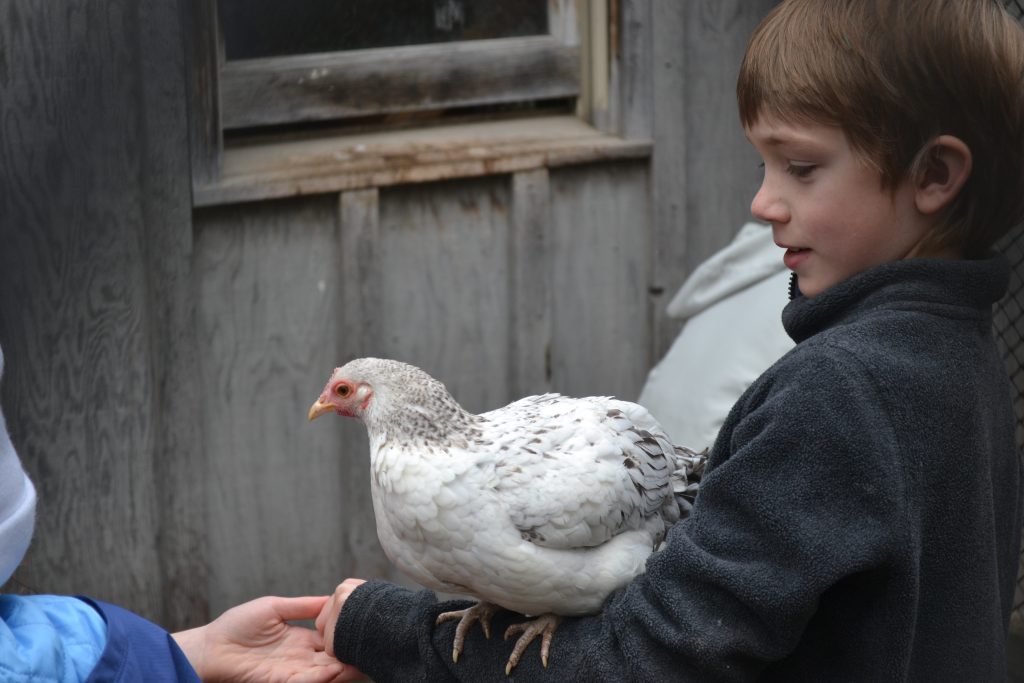 A student lends his arm as a perch for a friendly chicken.

Dodge’s Hens and Roosters class is aimed at kindergartners through 4th graders. They tour the coops, hunt for eggs and get to hold a chicken.

“These animals are the most approachable, least threatening to the smallest kids,” Pete says. “And it’s the closest of our animals to people’s daily lives because people eat chicken and eggs.”

Ashley Johnson, a Naturalist Fellow, brings students closeup to a bird of a different feather in her favorite class. She guides groups through dissecting an owl pellet in Bones, Bones, Bones, a class suitable for 3rd graders through adults. 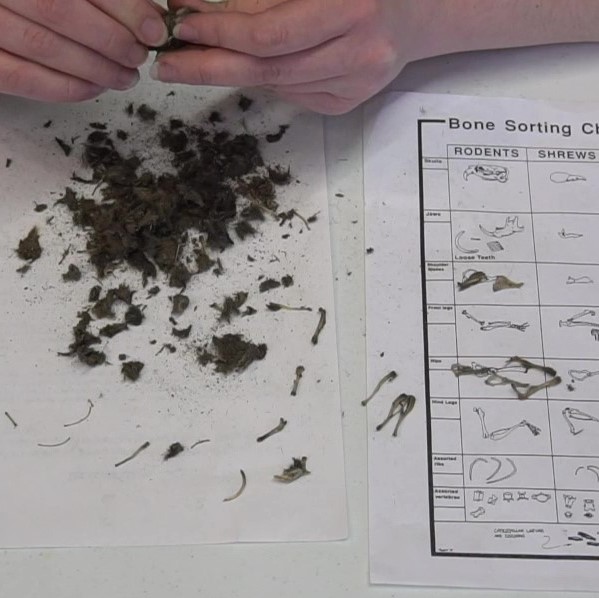 A dissected owl pellet contains many small bones; a sorting chart is needed to classify them.

The pellets contain all that an owl is unable to digest. Students pick them apart and identify the regurgitated fur, bones, teeth, feathers, and insect exoskeletons inside.

“The class is really free-form once you get past the initial information,” she says. “The kids get to explore a range of different kind of activities for different kinds of brains.”

In addition to learning about owl pellets, students assemble beaver and deer skeletons. They can even form a “Bone Band” and bang on antlers and leg bones to figure out what kinds of sounds come from different types and densities of bone. 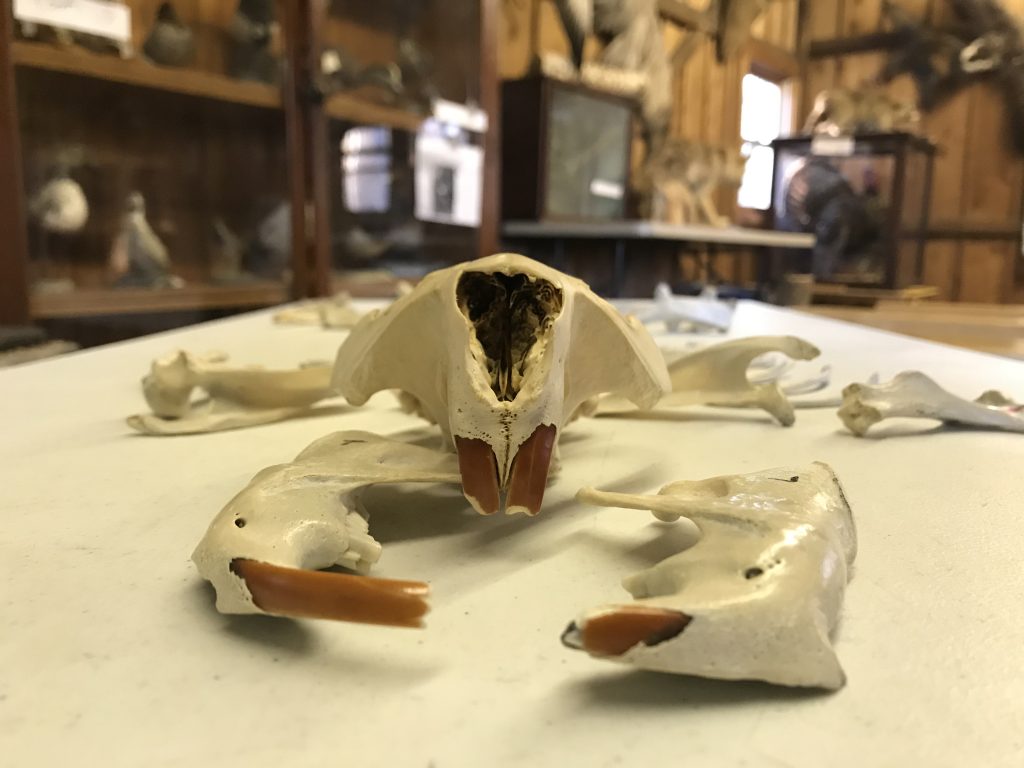 A beaver skeleton on display for students to observe up close.

“It’s more impactful than a worksheet,” Ashley says. “It’s an opportunity they wouldn’t have at school. It drives home principles in a fun, interesting way.”

“It’s always a chance for no-holds-barred creativity,” she says.

One particular summer camp experience stands out for her as a highlight of her career. A decade ago, she was leading a fishing-themed summer camp. One of her campers was a boy on the Autism spectrum. He did not verbalize many words, but it was clear to Pam that he loved their time on the hiking trails, fishing pier and swimming beach. 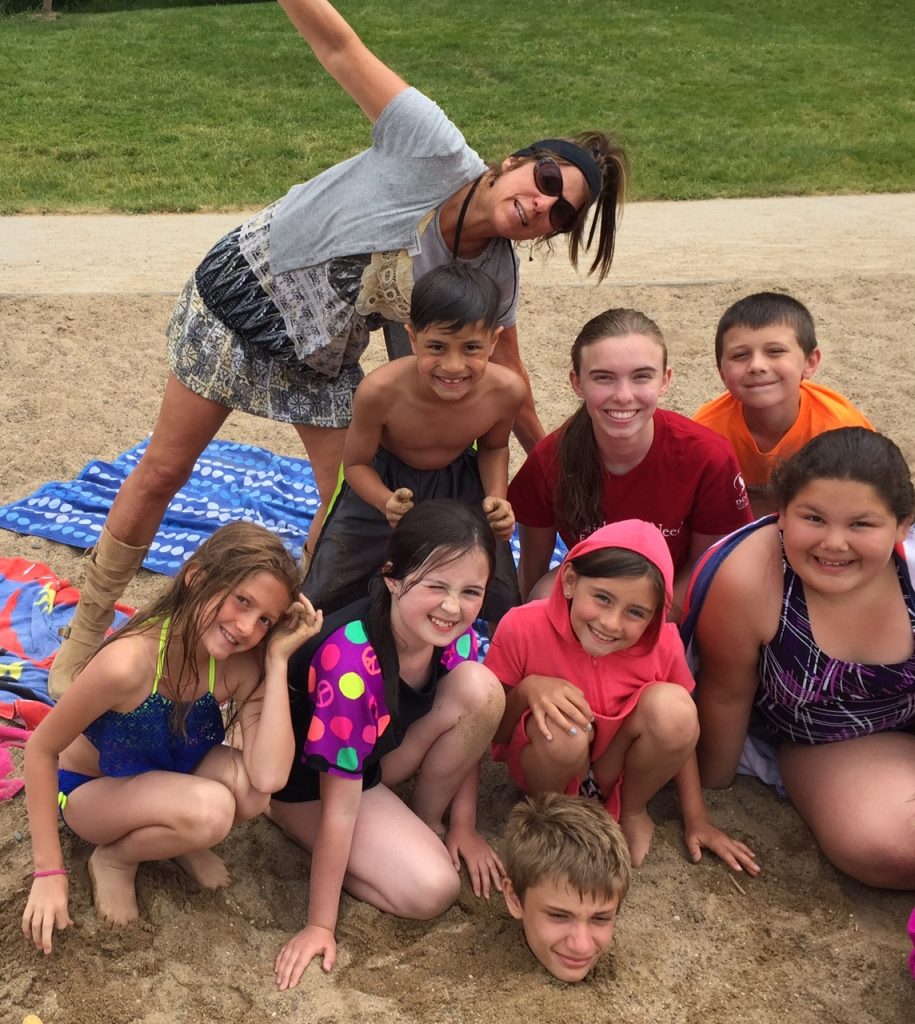 Naturalist Pam Welisevich and her Fish and Swim campers on the beach.

Before setting out to fish, all the campers gathered bait by digging in the dirt for earthworms. “Leave toads alone if you find them,” Pam told them. “Take only the worms. No toads—only worms.”

The next summer, the same boy returned to Dodge for a Harry Potter-themed camp. He brought his new service dog with him.

Pam had decorated the haywagon as the Night Bus, a triple-decker purple bus featured in the Harry Potter books and movies. She remembers loading up her young wizards—and one dog—in the makeshift bus and driving them “rickety rackety, topsy turvy” down the Farm Road.

“I just remember them all… every child and one dog, tumbling around, and their happy screams,” she says. 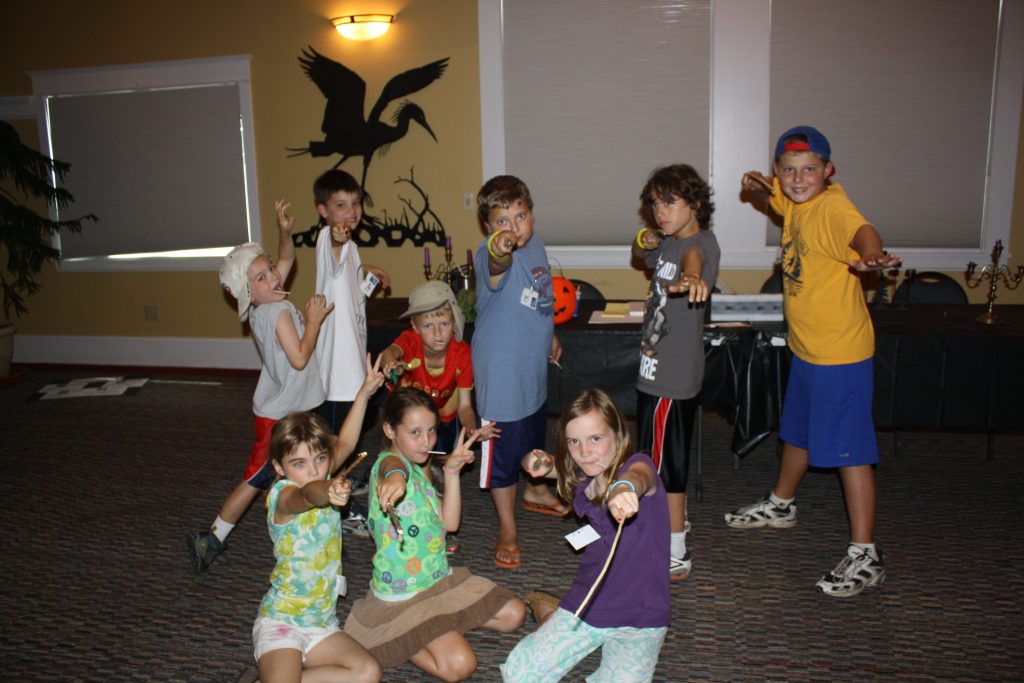 Dodgewarts witches and wizards show off their handmade wands.

Later, the campers collected worms to feed their wizard familiars (as portrayed by animals in the Dodge Lab). That’s when, out the blue, the boy spoke: “Pam says no toads, only worms.”

He had repeated what she said to him a year prior, word for word, verbatim.

“I was blown away,” she says. “It was fascinating and so exciting to me, that I meant something to him. That I made an impression.”

In every class and camp, Dodge naturalists hope to make an impact like Pam did that day. Under the dome of a planetarium, in a bustling barnyard, or on a rickety-rackety wagon, they aim to inspire future scientists, environmentalists and outdoorspeople. They love the element of surprise inherent to teaching young people—and the magic, too.